The 36th Annual Seattle International Film Festival ended on Sunday night, June 13, 2010.  On Wednesday night, June 16, 2010, all of the volunteers were invited to a Volunteer Appreciation Party, catered by Chipotle and Cupcake Royal, followed by a “special surprise movie invitation.”

The fun started at 6:30 at the Alki Room, which is part of (but next to) Key Arena in Seattle Center, and which is the future home of the SIFF Film Center.  I ran into Alan again, and met his friend John. In addition, I saw Karl, who had been in the same training session as me for the census (and therefore enumerated in the same area as me).  After they opened the doors and I got my drink, burrito, and chips, I found Alan again, and sat at his table.

Each table had cupcakes in their center, and every person at each table received a coupon for a free cupcake at any Cupcake Royal location.  While I sat on the lower floor, the Alki Room does have an upper floor, which is where I took this photo from: 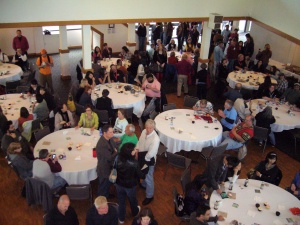 At the same time as I took this photo, Amy took the mic to tell us what the secret movie was going to be.  Alan had told me earlier that he heard a rumor that it was going to be The Hedgehog, which won the Golden Space Needle Audience Award for Best Film.  Amy confirmed the rumor, which made me happy because I was planning on seeing it Friday night at The Best of SIFF.  Now, I wouldn’t have to.

Around 7:30, people started leaving the Alki Room and heading over to SIFF Cinema.  I called one of my housemates, who said she might be going to the film, but hadn’t been able to go to the dinner.  I forgot, though, that I get no reception inside the theater itself.  When I didn’t see her with ten minutes to go, however, I figured she wasn’t coming (a voicemail message later confirmed my suspicions).

Ten minutes before eight is also when they started introductory remarks.  This woman spoke first:

She was followed by two guys from the Board of Directors.

And then, the three of them were followed by Monica, who coordinated all of the volunteers.

Monica mentioned some facts about this year’s festival.  For example, we entertained over 300 directors, actors, and industry personnel over the three-week span, and logged over 13,000 hours as volunteers.  She also mentioned that we can trade in our vouchers for Best of SIFF movies, but that we must do so in person.

Then began the awards ceremony.  Keith Yoshida won the Don Chan Award in absentia for going “above and beyond” as a volunteer.  In fact, he volunteered every day of the festival, helping out with all of the movie prints that came in.

Next was the Brian (something) Award, given to a year-round volunteer.  This year, the award went to Katie Parker.  The Volunteer of the Year Award went to Jobe, who gave more than 100 hours of volunteer time to this year’s festival.

After that, Monica mentioned the award-winners specific to each department.  So, the venue manager, production team, membership personnel, promotions team, drivers, and special events personnel all gave out awards.  Finally, the five people who had volunteered the most amount of hours got awards for being the top five volunteers of the festival.  So ended the awards ceremony; so began the film.

The Hedgehog is a charming, wonderful film from France about a girl, Paloma Josse (an excellent Garance Le Guillermic), who decides that she doesn’t want to live in a fishbowl all her life.  So, 165 days from when the movie begins, she is going to kill herself, on her 12th birthday.

She spends the days leading up to her birthday videotaping and commentating on her family and the other people who live and work in her apartment building.  Her mother has been in therapy for ten years and likes to talk to plants.  Her father is a minister “about to lose his post in a cabinet reshuffle.”  Her older sister “wants to be less neurotic than her mother, but smarter than her father.”  Hubert Josse, the fish, was bought 8 1/2 years ago, and is actually in a fishbowl.

At the beginning of the film, one of the tenants dies.  I don’t think I’m spoiling anything when I say that the movie ends with a death, as well.  In between, a new tenant arrives.  His name is Kakuro Ozu (Togo Igawa), and he makes friends with both Paloma and the concierge, Renee Michel (Josiane Balasko).  In a way, Paloma is a female Holden Caulfield, sick of the fakery that she sees around her.  The only two people who strike her as genuine are Mr Ozu and Mme Michel.  In fact, she confides to Mr Ozu that she believes Mme Michel is actually cultured on the inside, despite her outward appearance.  But, like a porcupine (or a hedgehog), she keeps people at bay.

Mr Ozu agrees, and one of the joys in this film is in seeing how, little by little, he brings out the real Mme Michel: a woman who loves Anna Karenina and Japanese film (even asking Mr Ozu if he’s related to THAT Mr Ozu), a woman who has named her cat “Leo” after Leo Tolstoy, a woman who has shut herself off from love since her husband died.  Mr Ozu, too, used to be married, but he has not shut himself off from the world.  In fact, he helps to bring Mme Michel back into the world.  And then we find that there is a second hedgehog in the film.

This is certainly a crowd-pleaser, and one that, while seeming to follow a conventional story structure in hindsight, does not feel so conventional when watching it for the first time.  I suspect that is because the movie is so focused on its characters, and what wonderful characters they are!  Plus, any movie that features French and Japanese, and references Ozu and Tolstoy, is fine in my book.  One convention that the movie follows in regards to its ending I usually don’t like, but it works in this case, because of how it affects the characters, and changes them.

Because so much of one’s enjoyment of this film depends on the three main characters, I feel the need to name them again: Garance Le Guillermic (Paloma), Josiane Balasko (Mme Michel), and Togo Igawa (Mr Ozu).

For what it’s worth, I didn’t think this was the best film of the festival, but it is one heck of a film.  Oh, and bring tissues.

Before I give my final thoughts on SIFF 2010, some acknowledgments.  Thanks to IMDB, Wikipedia, Roger Ebert, and Grace Wang for helping me fill in knowledge gaps while writing these reviews (via their websites).  For leading by example, thanks to Roger Ebert, David Bordwell,  S M Rana, Ronak M. Soni, and all of the Far-Flung Correspondents ( Grace, Wael, Michael, Omar, Omer, Seongyong, Ali,  and Gerardo), especially to those who have written about other festivals–you showed me how it was done.

Final Thoughts: In a way, I’m glad that the festival is over.  Writing twelve movie reviews while trying to report on the experience, as well, was tiring (though a great way to keep my writing from becoming rusty).   So tiring, in fact, that I may be getting sick. 😦  Or that may be the weather’s fault: first day of summer feels like a nice spring day.

Despite the fatigue, I  I loved every minute of the festival (well, maybe not those minutes consumed by less-than-stellar films, which were luckily kept to a minimum).  Loved volunteering, loved watching movies for free, loved getting vouchers, loved seeing Edward Norton, loved meeting Caroline Kamya and Lixin Fan, loved chatting with movie lovers outside and inside the theater, even loved standing in line, waiting to be let in.

But now, it’s over, and while I plan on watching movies in the future, I think I’m going to do something else for a change.