I checked out this morning from Eastland Suites, and while I put my key card in my jacket pocket, it must have fallen out as I exited the room. I could not find it, even when I retraced my steps, so I know it fell out before I reached the hallway. I told the guy at the reception desk; he said not to worry about it.

(As I haven’t been charged anything to replace the key, I’m assuming they found it.)

@Plaidgirl picked me and @vanyc up from the hotel, but made fun of how many suitcases I had with me (only two). Donny and Anne came later.

Brunch was at the Emerald City Lounge (a buffet), and @Plaidgirl paid for everyone before we knew what she was doing. Also, they served bacon. 😉 Before heading to the theater, I transferred my luggage to Donny and Anne’s rental, having to put up with some more ribbing from @Plaidgirl.

Anyway, we ran into a few people outside the theater before the movie began, including Tom, Grace, Michael, and Pablo. Grace was taking photos with her driver, so I took the opportunity to get another photo with her, Susan, Michael, and Pablo. While I had met Pablo during karaoke, being introduced to him by Michael probably made me stand out a bit more than a random introduction in a dimly lit bar. At the time, I still hadn’t heard about his love of Satoshi Kon films; otherwise, we would have clicked even more. What we did discuss was his crying onstage during the panel. Michael was jealous in that people would remember that 🙂

As Michael hadn’t met some of the other people we sat with in the balcony, he came up to visit a few minutes before the film began, along with his wife. We shifted our seats slightly, in that on Sunday, we could sit in the first balcony row, which had the added bonus of more legroom than the seats we had sat in previously. My pictures still looked like crap, though.

Before the film was introduced, a special Golden Thumb was given to Mary Susan Britt, who is the Associate Festival Director at Ebertfest, for all her hard work in making sure the festival runs smoothly.

Then came the introduction for the only film of the day and the last film of Ebertfest: Louder Than a Bomb. Chaz teared up in introducing this film because one of the directors of this documentary, Jon Siskel, is Gene’s nephew.

Poetry slams were invented in Chicago in 1986. Louder Than a Bomb is the largest of these slams. The film follows several of the participants and schools in the 2008 Louder Than a Bomb Poetry Slam in Chicago, which pitted sixty high schools against each other. Who would win this time? In 2007, Steinmetz won, even though it was the first year that school had entered.

I don’t think I’ve heard so much clapping during a film. Poetry slams are poems meet performance art, and some of the poems and the performances in this movie are breathtaking. Nova Venerable has a younger brother with special needs, and while she often writes about her absent father, the poem she chose to write about her brother for the competition is as well-written and moving as anything you will see or hear in the literary canon (especially as she performs it). Adam Gottlieb performs with so much charisma that a full performance of one of his poems, coming near the center of the film, got the biggest applause of all the performances (including from me). Forget high school; I can’t write like that now! Nate Marshall, who acts as a mentor to some of his younger team members, performs the last poem in the film — which is fitting, considering that the subject is the Louder Than a Bomb Poetry Slam itself. The poem starts by saying how great he is, then gives way to humility for his fellow contestants in a dizzying array of words.

Though this is a competition, contestants are reminded that, “The point isn’t the point. The point is the poetry.” In fact, poetry slams are a trick to get students to write, perform, and appreciate poetry.

Lamar Jordan, one of the “Steinmenauts,” did not adhere to this philosophy. In the film, he only wants to win. During the panel discussion after the film, however, he admitted that he has changed his mind on that matter, and now believes that the point is the poetry, as well as believing it’s unfair to assign points to poetry. 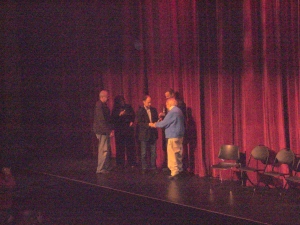 After giving the Golden Thumb Awards to Greg Jacobs and Jon Siskel, Chaz introduced the rest of the panel: Kevin Coval (founder), Grace Wang (wearing her red shoes), and the Steinmetz team: Lamar Jordan, Charles Smith, She’Kira McKnight, Kevin Harris, and Jésus Lark. When introducing Grace, Chaz mentioned that she is also a poet, at which Grace smiled and vigorously shook her head.

“I think she’s a poet, a lawyer, and a film critic,” Chaz continued.

During the Q&A, Kevin mentioned that Louder Than a Bomb was started in 2001. Currently, about 72 teams compete. He also mentioned, later on, that the best poets often lose the poetry slam.

“I think anyone can be a poet, and I think that’s part of the thing that makes poetry so beautiful,” he explained.

When asked about future projects, Greg Jacobs said that this project was like being in a really good relationship.

Finally, when asked about their influences, the Steinmetz team mentioned Pablo Neruda, Maya Angelou…and Adam Gottleib. Apparently, he is as unique in real life as he appears in the film. Jésus mentioned that, one time, people were rapping, and Adam appeared out of nowhere…and started accompanying them on a flute.

Sadly, Donny, Anne, and I had to head to the airport before the Q&A was finished, which also meant that we missed the performances (which the sound and picture quality online can’t do justice to). When Anne mentioned that we had to leave no later than 3:00, panic hit my stomach with a pang of sadness. I realized I’d have no time to say goodbye to everyone (particularly Grace, who was still onstage), and I wasn’t sure if I’d be able to grab Tom for one last picture. Also, the finality that the festival was over sunk in, and it sucked.

Around 2:45, we said goodbye to our section, though I was too far away to give a hug to our fellow Tweeters, and we headed out the door. Luckily, Tom was outside, so I got to take this photo with him right before we left.

On the car ride to Indianapolis, we talked about various things, including how Donny came up with the idea for Tweetplays (basically, he was bored), and how, next year, we’re flying out on Monday. As we passed bales of hay, and cows, and flat land, I took a nap.

We parted at the airport, and I once again went through the full body scan (though a different machine) with two of the funniest TSA agents I’ve ever seen. A sense of humor goes a long way, but I still think full body scans are bullshit. And my flight was delayed. Luckily, that didn’t translate into another night at the airport.

I had a short stopover in Denver (they were boarding as I entered the gate), and I had to have my ticket reprinted, since they only gave me one ticket for two flights in Indianapolis, and the agent had taken that ticket from me. Back in Seattle, one of my housemates drove me home. Along with all the memories and photos I brought from Ebertfest was the knowledge that I would be starting my new job tomorrow. Reality had made its return.

It has now been almost a month-and-a-half since I went to Ebertfest, so I must applaud any of you who are still reading this. While the festival is certainly about the movies, it’s more about the people. In my mind, that’s what differentiates it from SIFF. Sure, there are people to meet at SIFF, but no one applauds at SIFF when a special guest’s name appears on the opening credits, and those guests don’t always mingle with other theater-goers. On his excellent blog, Kenji talks about how Ebertfest “reawaken[ed] my awareness of the pleasures of the cinematic theatrical experience.” And that is a credit to the people who watch these films. Sure, without good films, good audiences wouldn’t matter, but without good audiences, good films would never be made.

Ebertfest 2011 was dedicated to the memory of Claude Chabrol, Jill Clayburgh, Tony Curtis, Blake Edwards, Dennis Hopper, Sidney Lumet, and Arthur Penn. In that same vein, I would like to dedicate these Ebertfest posts to everyone I met at the festival, especially my fellow Tweeters, the Far-Flung Correspondents, and — most of all — to Roger and Chaz Ebert. And for those of you who couldn’t make it to the festival this year, I hope to see you next year. Until then.