1. Arrived at 1:30 for 2 pm press screening.  Told it would be delayed by roughly 45 minutes (it ended up starting 40 minutes late), as the previous screening had issues.  Initially supposed to show Breathe Umphefumlo, but it didn’t arrive on time, so screening swapped with Liza, The Fox-Fairy, but then the film arrived, so everyone moved from House 1 to House 2, except it wouldn’t play, so back to House 1 and Liza, The Fox-Fairy. Too bad I didn’t come earlier, as that was one I wanted to see, and apparently amazing!  Not sure if I wanted to stay for The Hallow (House 2), as I didn’t want to be late for opening night, but offered a ride, so saw it, then stayed after my ride had to leave because he forgot a plumber was coming to his house that day.  Didn’t need to stay.  Not that it was bad, but not much happened.  Luckily, a friend said she could drive me to opening night, so I had just enough time to get changed and eat dinner. 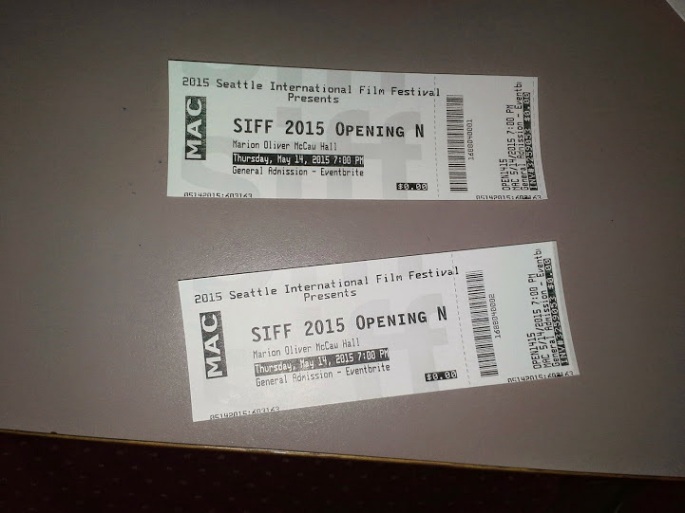 2. I’ve been to the Opening Night Gala before, but only did the movie once (a staff-only screening at the Uptown) — unless you count the press launch last year.  This was the first time I got to experience the madness inside McCaw Hall, for even when I volunteered on opening night 5 years ago (my first festival), it was at Benaroya Hall.  The friend who drove me had to wait for her friend, but we met up with my +1 (one of our awesome lead ushers) and headed to McCaw Hall.  Large sign in the lobby from 20th Century Fox about not recording or photographing the film (and they took the #bewatching tag seriously, except that they were watching the patrons).  Ran into several people I knew.  Found out general seating was on the 5th floor (2nd Balcony) — a place I know well from going to the ballet. 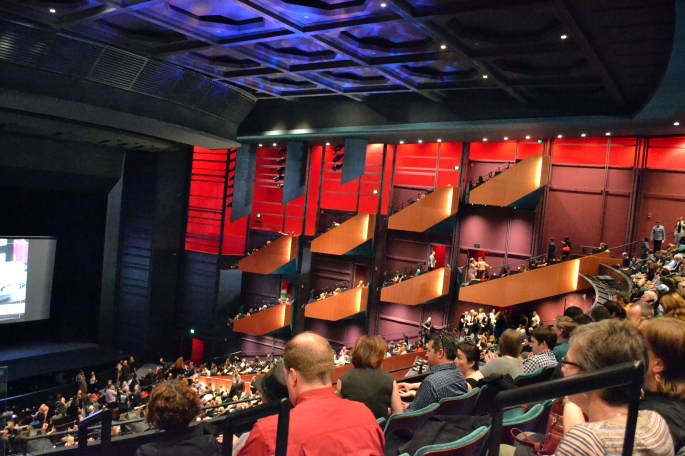 3. Around 7:30, announcement made about the prohibition of recording devices.  Then the creepy SIFF trailer began, followed by a short film showcasing the office staff commenting on how they pull off the festival (and Carl Spence, the Artistic Director, acting very excited).  Then Mary Bacarella, Managing Director of SIFF, and Carl Spence kicked off the night with opening remarks (including a new grant that will be given each year to a documentary filmmaker creating a film on a specific theme — this year’s is aging and the elderly), followed by Brian LaMacchia, who is the president of the Board of Directors, followed by Mayor Ed Murray, who spoke out against the oil rig twice in his speech (to thunderous applause) and who also gave out the governor’s award to the richly deserving Megan Griffiths, who gave a short speech thanking Seattle and its film community, her crew, and her parents.

4. Running a little late (7:44), Spence introduced the director of the film, mentioning how, at last year’s festival, Bridesmaids was the only non-festival film bringing in crowds, and he wondered why.  He introduced director Paul Feig, who did a short introduction.  Then a trailer mash-up of many of the films playing in the festival, followed by the film.

5. I had reservations about a mainstream film kicking off the festival, but Spy was an excellent choice.  The dialogue is funny and excellent (1/3 of it was lost to laughter), while the plot reminded me of the Get Smart movie, which I also enjoyed.  I told my friend after the movie, “Melissa McCarthy is a star,” which is not to detract from the excellent supporting cast (including Alison Janney, Miranda Hart, Rose Byrne, and Jason Statham).

6.  I stayed for the credits, but left before the Q&A so that I could arrive at the after-party before the lines started forming for food.  Due to my “connections,” I got the unlimited drinks bracelet.  Due to my stupidity, I did not use it.  Then again, I was fine with a wine sample and several bottles of water.  Part of the fun was dancing with my crew, including one of our number who is a bit shy about dancing (she danced three songs).  We even got the Artistic Director out on the dance floor near the end of the night.  The only negative was that I danced too close to speakers, so my right ear was ringing for the rest of the evening.  Next time, I’m bringing earplugs.